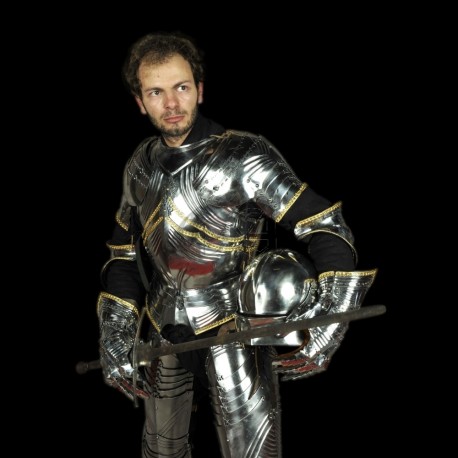 Like many re-enactors or Jousters, my childhood dream was, ever since I could remember, to own an accurate reproduction of the fabulous armor made by Lorenz Helmschmied for Archduke Sigismund of Tyrol.

The dream began to become reality on a day in October 2011, when Marie and I entered the Kunsthistorisches museum of Vienna. I often say that that day was the second best day of my life (the first best day being, of course, the day when I met Mary!) The armor had been removed from its mannequin and disassembled in the laboratory of the museum, where we spent 7 hours (Mary is a saint;) For the rest, my HUGE smile on the pictures says more than 1000 words could do.

It has been at this moment that I met Thomas and found my vocation for the file-work. Given the amazing number of tiny little "fleur de lys" sculpted in all the parts, there were plenty of fun to do !

Since then, the armor has known many battles, some good fights with friends and I still love it. I have never sold any parts but some pieces have had twin sisters: for example, I have made a pair of pauldron similar to mine for my esteemed friend and company leader.

We are currently working on a new armour that will be thinner and closer to the weight of the original. With some luck it will be finished for the historical animations of April holidays at the castle.

This product is no longer in stock

Notify me when available